Cannock Chase is a large area of woodland and heathland in Staffordshire, south of the County Town of Stafford. Cannock Chase was designated as an Area of Outstanding Natural Beauty (AONB) in 1958, but has a much longer history with Richard I granting the chase to the Bishop of Lichfield as a hunting reserve in 1189. The Chase is a superb area for low level walks. Cannock Chase is the largest surviving area of lowland heathland in the Midlands. Although being mentioned in the Doomsday book there is very little semi natural woodland left on the chase with the best example being Brocton Coppice where some of the 600 Sessile Oak trees may be as old as 600 years and many are over 200 years old. The Chase has a mixture of environments (40% is woodland) which includes coniferous plantation and sand and gravel quarries as well as open heathland. Care should be taken as logging takes place in the plantations and warning signs need to be followed. The area is safe to walk but it is wise to stick to clear paths especially over the heathland areas as deep fissures have opened up in places which can be hard to spot and have lead to people falling and being trapped in the recent past. 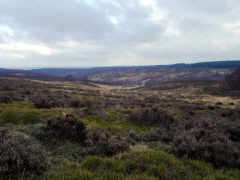 The chase has many small car parks and good road links so parking and access is good. Facilities are limited with a small visitors centre and café in a central location but nearby towns such as Rugeley and Stafford offer places to eat and shop. Also on the edge of the chase are various 18th and 19th century country parks including the famous Shugborough Hall, the former home of Lord Lichfield. Much older historical sites exist on the Chase with the Iron Age hill fort at Castle Ring dating back 2500 years. During World War 2 Cannock chase had several military bases and prisoner of war camps and even a railway supply route the route of which can still be seen in places. Fans of the ‘Band of Brothers’ series may recognise the look of some areas as US troops were trained on the Chase, as the area contain very similar terrain to the Ardennes Forest in military terms. Large rifle butts can still be found. The connection to World War 2 doesn’t end there and Cannock Chase also contains Commonwealth and German war cemeteries which are very well kept and well worth a respectful visit.  Harder to find is a small memorial to Polish civilians who died during the Katyn Forest massacre during World War 2.

Cannock Chase is rich in wildlife due to the variety of habitats it contains, the largest being the deer population of between 600 and 900 animals.  Fallow deer are the most common but larger red deer are also present and also the tiny Muntjac deer which people some times mistake for wild pigs, whose dog like bark can sometimes be heard when they are disturbed. Dusk and dawn are the best times to spot deer if you are quiet especially near areas where the deer come to drink, care must be taken during rutting season as the deer will often cross roads in the path of oncoming cars and an impact with a large deer can do considerable damage to a car and injury to passengers. During the rutting (breeding) season the male deer (stags) will bellow and challenge each other and rake up areas of grass land known as the deer lawns, producing damage which looks man made. The sight of a large Red Deer Stag in the wild is very impressive. Note this is a wild population of deer and probably dates back to deer introduced by the Normans for hunting (with the exception of the tiny Muntjac deer).

The Chase represents an excellent walking area which is much wilder than areas such as Sutton Park in Birmingham and offers a true taste of a semi wild environment. It is often over looked as a walking area and is well worth a visit. It is a deceptively large area and it is quite possible to get lost on the chase (or return to the wrong car park!)  A good map is essential as paths often change on the chase, the walking can be steep in places but most paths are good.

The Chase is covered by one Explorer map